Deal-makers seem to be anything but deterred by bitcoin’s price pain this year — they’re actually using it as an excuse to go bargain hunting. Despite the ongoing bear market in the sector, merger and acquisition activity by cryptocurrency companies among themselves and by companies hunting for bitcoin’s underlying technology is hitting record levels.

Total blockchain and crypto-related deals have surged more than 200 percent at an annualized rate this year. Bitcoin, meanwhile, has lost 54 percent of its value. As of today, 115 deals involving cryptocurrency or blockchain had been announced, on pace to hit 145 by the end of 2018. The count is up significantly from the 47 total deals completed last year, when bitcoin’s price was surging to almost $20,000.

While JMP didn’t have data on the average size of the deals, since many of the details are private, the firm said a majority of the M&A transactions are global in nature and «relatively small» at less than $100 million. 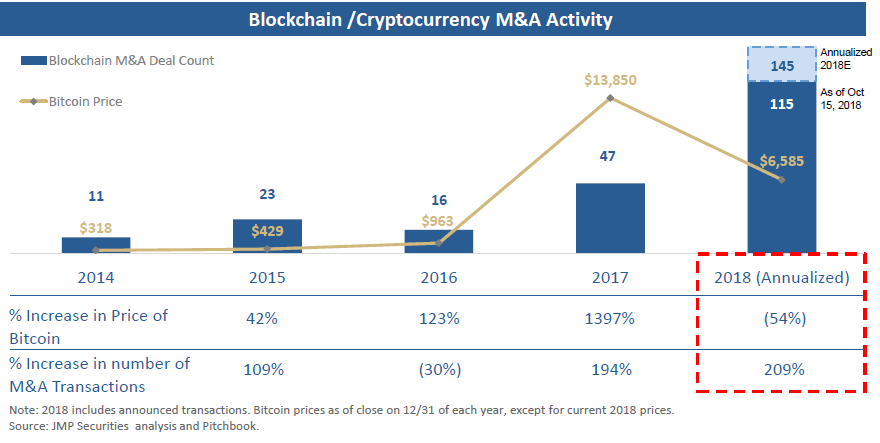 During this deal frenzy, cryptocurrencies have lost more than 65 percent of the total market capitalization and trading volumes have dropped 55 percent, according to CoinMarketCap.com. As digital assets linger in what some are calling «crypto winter," most token prices are still correlated to bitcoin, regardless of the underlying value of the company.

Because of that, there seems to be a disconnect between value and valuation — early stage companies are being bought, or at least invested in, at discounted prices.

While bitcoin has been around for a decade, the rest of the cryptocurrency industry has really only started flourishing in the last two to four years. In order to keep up with the industry’s breakneck pace, companies are often forced to buy instead of build. Starting from scratch could simply take too long. This industry is like a treadmill — the only way to keep up on a treadmill is to keep running by investing in new technology.

The current strategy is a «land grab» for innovative technology, access to new markets and intellectual property that can help these companies grow quickly. Communities and users are another part of the strategy. Companies are able to add users, a key part of any tech start-up's valuation, almost immediately through an acquisition.

The sector does present challenges, though. Valuations are complex, especially for companies that raised capital through an initial coin offering, or ICO. That method of crowdfunding often promises future use of a platform, some sort of payoff, or company ownership, in the form of a token. While institutional investors might be interested in buying the token associated with a project, it’s more likely they’d want an equity stake in the company.

To make it even more complicated, many of these deals are happening before these fledgling companies are able to prove themselves.

As soon as a company becomes interesting, they get bought — the deal size may still remain small, but the number of deals will increase because that’s the most viable and fastest way to grow in this environment.

Spain on Tuesday approved a year-long extension, until the end of 2022, to restrictions on foreign takeovers of Spanish companies it regards as strategic....

China: What is Evergrande and is it too big to fail?