Global deal values are expected to suffer two straight years of double-digit falls through next year, as the protracted U. S.-China trade war sparks recession fears, according to an annual deal report released on Monday.

The value of global mergers and acquisitions is expected to fall 15% this year, followed by a drop of 26% next year, according to the Global Transactions Forecast released by Baker McKenzie, one of the world’s largest law firms.

«We see investors and corporations remaining cautious during 2020, faced with mounting economic and geopolitical challenges," the report said. «Economic uncertainty and the risk of a global recession are likely to dampen transaction volumes next year.»

The report expects 2019 to be «the slowest year» for the global economy since the financial crisis of 2008−09.

The report comes after Washington and Beijing resumed trade talks in Washington last week and reached a deal that averts a U. S. tariff hike on Chinese goods for now. 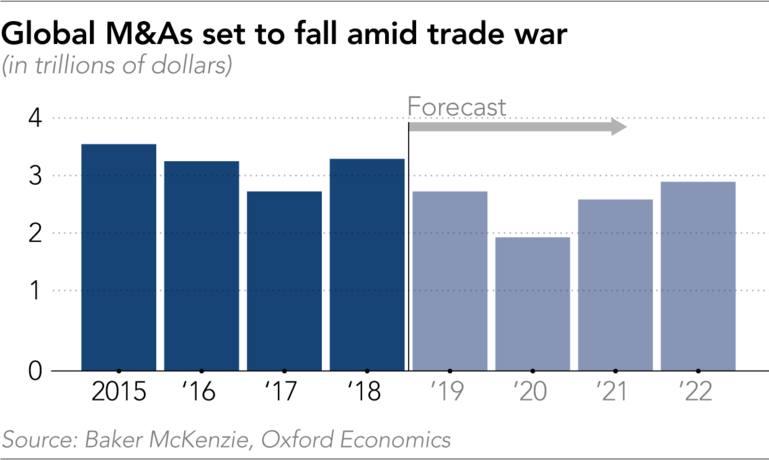 But the trade war is not the only drag on the global economy and deal activity. Growing concern about overstretched market valuations is another, as testified by a weak initial public offering of Uber Technologies in May and the postponement of the IPO by office-sharing startup WeWork in September.

«We see a high risk of a correction in the global equity markets in coming months, ushering in a period of protracted volatility," the report said.

Recovery in M&A activity is expected in 2021, but it is likely to be gradual, as a technological rivalry between the U. S. and China is expected to continue, resulting in tighter restrictions on Chinese companies conducting M&As and technology acquisitions in the U. S.

«There is still lack of spending (in China) on deep technology, very fundamental science that causes big breakthroughs in technology," said Shaun Roache, chief economist for Asia Pacific at S&P Global Ratings. «A lot of the R&D in China is on commercial applications of existing technology… It is still heavily dependent on foreign technology.»

Chinese outbound M&A spiked in 2016 under the Made in China 2025 vision that calls on Chinese companies to acquire technology overseas and bring it home. Such M&As have plummeted under tighter Western restrictions. If China wants technology, it will have to invest in it itself, which will take longer and will be more costly.

«Remember that China has been trying to develop its own semiconductor industry since 1980s and it’s still behind the frontier," Roache said.

A declining current account surplus in China, due to a slowdown in exports, also makes it difficult for China to make overseas acquisitions. Amid tighter controls on Chinese outbound M&As, investors are looking at China’s domestic market for opportunities, as Beijing relaxes its controls on foreign investment.

«People are still interested in investing in China," said David Allen, a partner for private equity and M&A at Baker McKenzie. «If a market as big as China effectively starts to liberalize more, that will create an abundance of opportunity for private-equity investors and strategics.»

Allen said he anticipates an increase in inbound M&A deals in China, especially in sectors such as automotive, health care and financial services.

There are already signs of such activity. On Sept. 30, PayPal said it had won Chinese government approval for its acquisition of GoPay to become the first foreign company to provide digital payment services in the country.

China has taken steps to open up its financial services industry to foreign companies, under pressure from the U. S.

«Chinese consumers have emerged so much today and that’s not something the market outside China has done a good job at in terms of trying to capitalize," Allen said. «There is a real opportunity there.»

Spain on Tuesday approved a year-long extension, until the end of 2022, to restrictions on foreign takeovers of Spanish companies it regards as strategic....

China: What is Evergrande and is it too big to fail?